When I first flew into Kabul, I noticed something from the air that I couldn’t explain. Driving through the city, I saw it from the ground and I still couldn’t see the reason for what I was looking at.

It’s very common to see large parcels of land enclosed in high brick walls. In the city, the pieces of land are smaller, but the walls tend to be even higher. As I flew to Herat and back, I saw this all over the country. Wherever there were small towns or collections of homes, there were lots of land surrounded by brick walls with absolutely nothing inside. In the desert, it was slightly depressing to see a 20 meter by 20 meter square of dirt and rock carefully surrounded by a well-laid brick wall. I felt sorry for the people tending these empty plots and wondered how they could afford bricks and mortar and the time to build a wall, but couldn’t afford to build a small home or some other structure. Why a wall and nothing else? 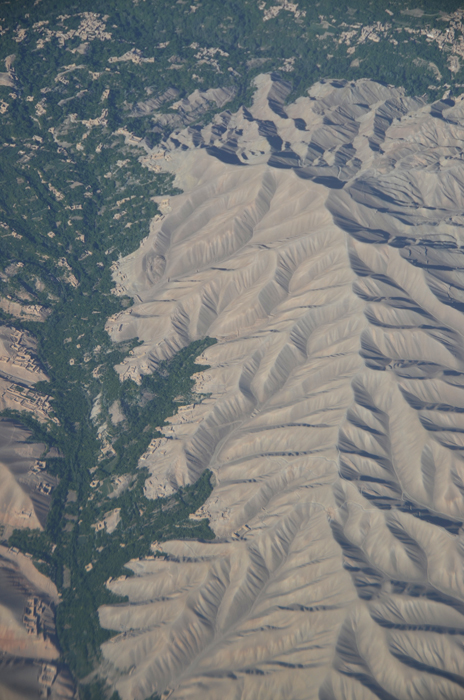 You can see the walls built around nothing in the edges of this picture.

At lunch today, I spoke with Khaliq and Ghafoor and asked them about it. They were keen on telling me about some of the other things that are unusual here in Afghanistan, namely the roadside money exchange. There are so many different kinds of money floating around this country. Dollars are everywhere, Afghani’s of course, AED’s from Dubai, Italian (beepity, boopity) money from the ISAF forces, and many others. Apparently, the custom here is to get money changed from one currency to another by walking up to one of the several people that hang out at intersections and ask them if they’ve got change for a twenty. Instead of hawking some sort of goods, they are trying to turn a profit with arbitrage.

I was fascinated by this, wondering how these guys stay safe from people with guns who offer to trade their money for not shooting stuff. But I really wanted to know why people would build walls with nothing in the middle.

After a quick Dari conversation, they let me know that people who build the walls do it because they are staking their claim. That made sense to me and I told them that in the US, we mostly build fences. They told me that fences are not that common because the wall is solid and tells others “this is mine.”

But also, the wall is something they build to indicate that they will build more there someday. A home with a courtyard in the middle may be built there in the next few years. They build the wall as a sign of the future, and what it will be someday.

I’ve been reminded many times to distrust the Afghani people, and for the most part, I try to stay alert with all of the locals. It’s not their fault that there are so many conflicting priorities in this country, and I can imagine that after so many years of scraping to get by, personal integrity takes a back seat to survival. Not to mention that my idea of personal integrity is a concept that may not apply to people of other cultures.

But I have a respect for these people when I see something like acres and acres of walls – skeletal frameworks for the dreams of the poorest of the poor. It makes me think about what it means to hope for the future. I think about the people I know that are too afraid to build a wall around the place of their dreams. I think about myself and how I lack even a tenth of the purpose that these wall builders have, yet have ten thousand times the resources. I think of the focussing power of sectioning off that part of the world that you would tell everyone, “this is mine.”

All of these thoughts are available in my new book, “Build a Freaking Wall Around It!” And you can catch me on my book and motivational speaking tour, coming to your city early in 2012!

This entry was posted in Super Serious. Bookmark the permalink.