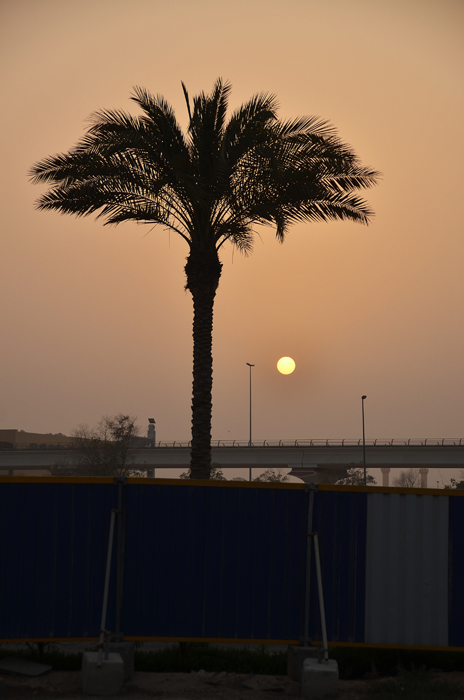 Such a great view - if it weren't for the construction barriers in the foreground, but I suppose that is as representative of Dubai as anything. 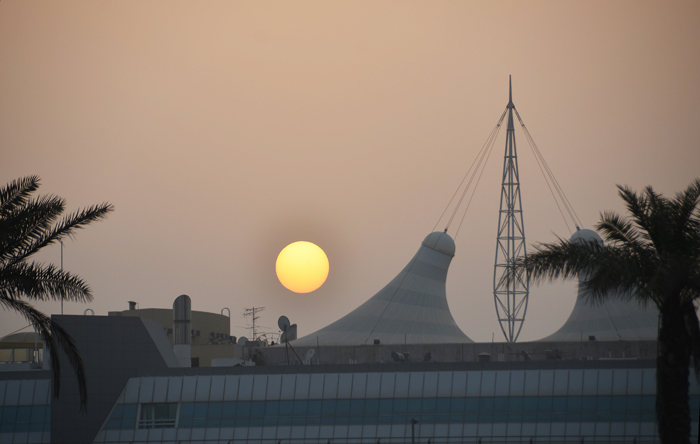 Sun setting over some restaurant. That's exactly what it looked like - you could stare right into it because it was just a semi-bright opaque circle. The haze near the horizon was so thick. 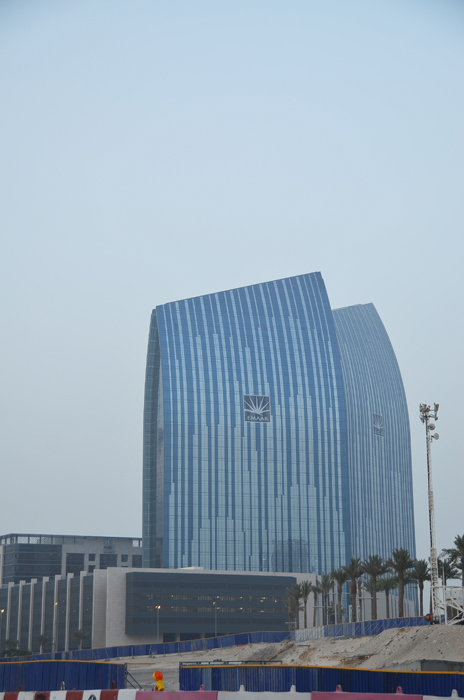 Just another couple of buildings owned by the same corporation. I like this design. Makes me think of a large blue highlighter. 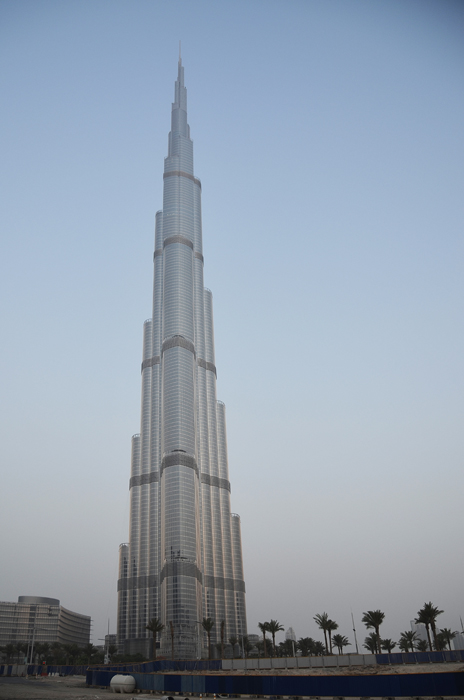 My last view before I got right up to it. I straightened this out and it's still bowed out to the left because of the curvature of the lens I'm using. 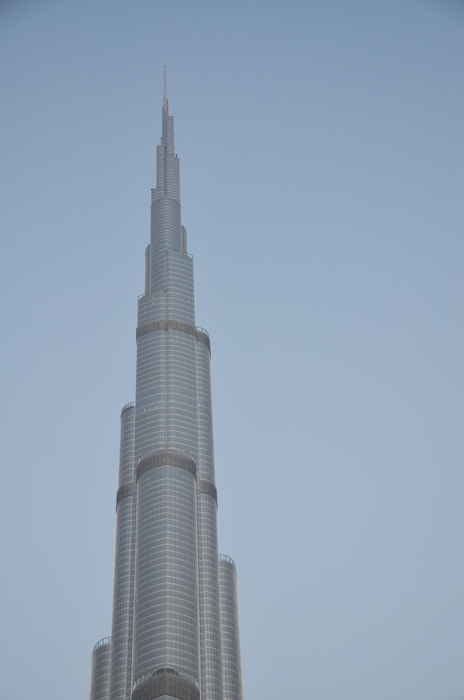 Just the top of the tower. I don't know where the last terrace available for viewing is located. But wherever it is, it's dang high. 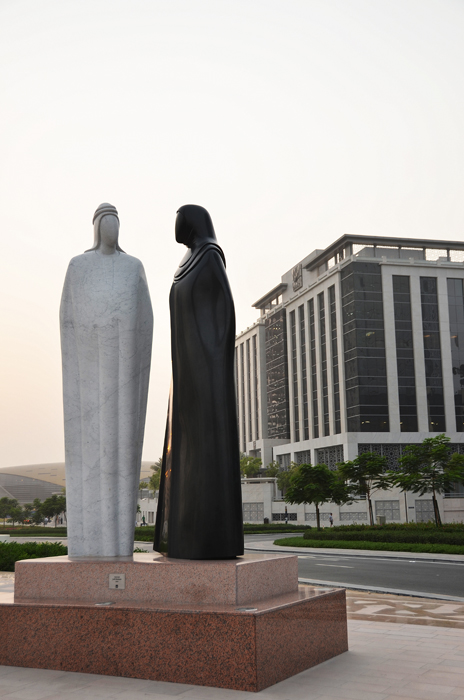 A haunting sort of sculpture in front of the tower. 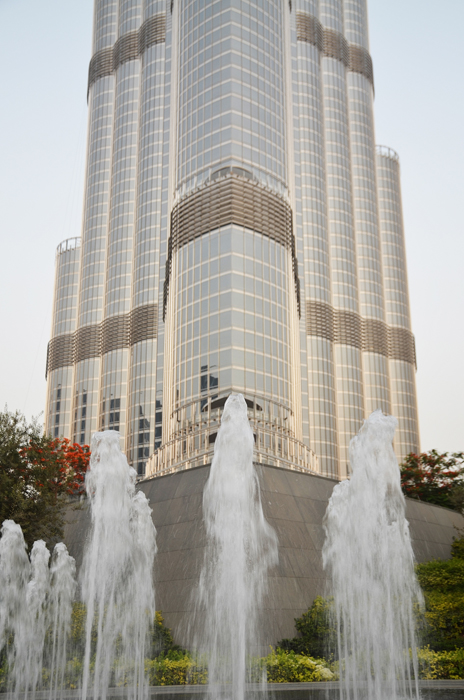 The huge fountains at the circle drive in front of the Burj Kalifa. I couldn't go in, and it costs $100 AED ($30) to go to the top. Maybe some other day when it's not so humid and hazy. 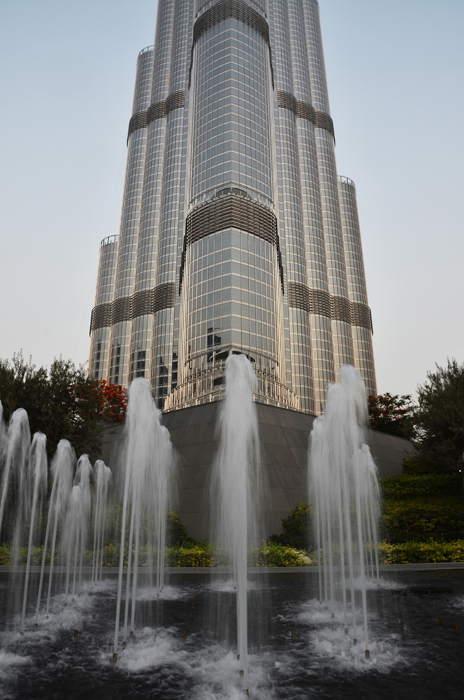 Slow shutter to smooth the water out a little bit. 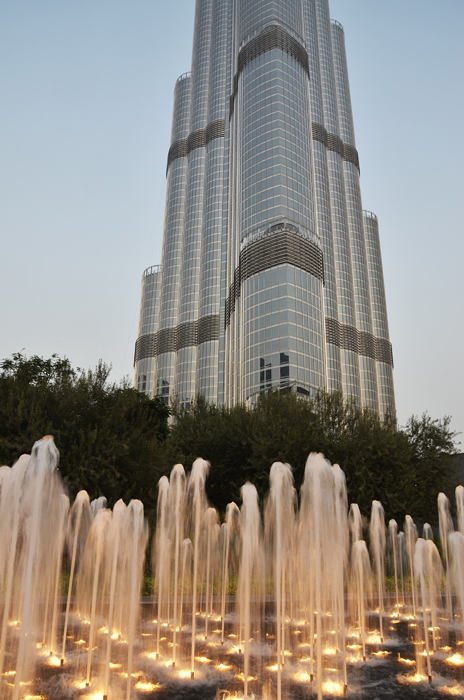 Slowing the shutter down, and they turned those lights on, which helped to make a nice shot. 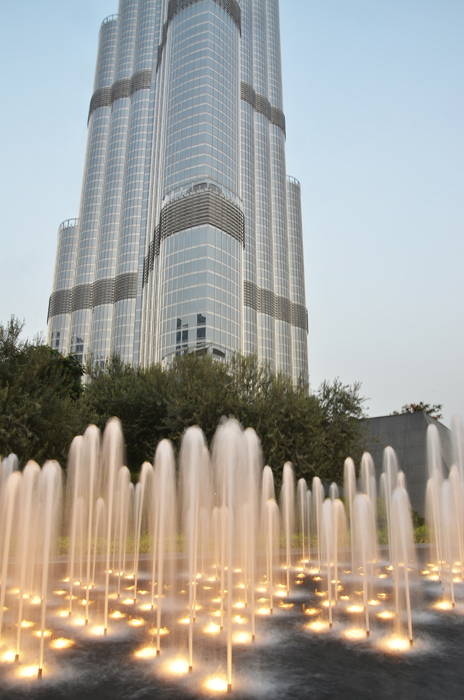 Who's handholding this shot at .8 second? Me. 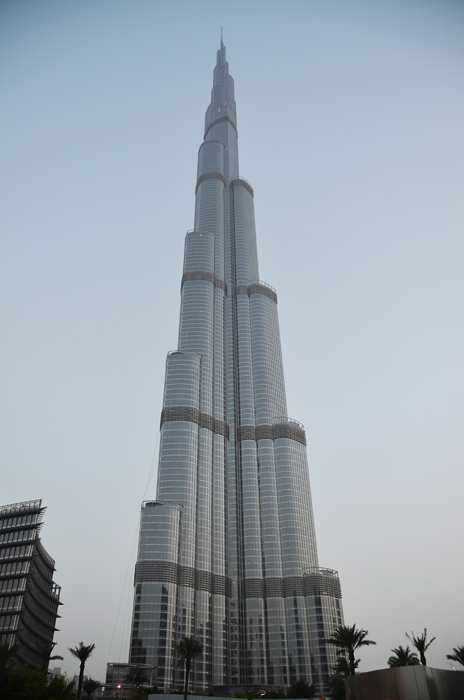 The view right before I stepped into the Mall. 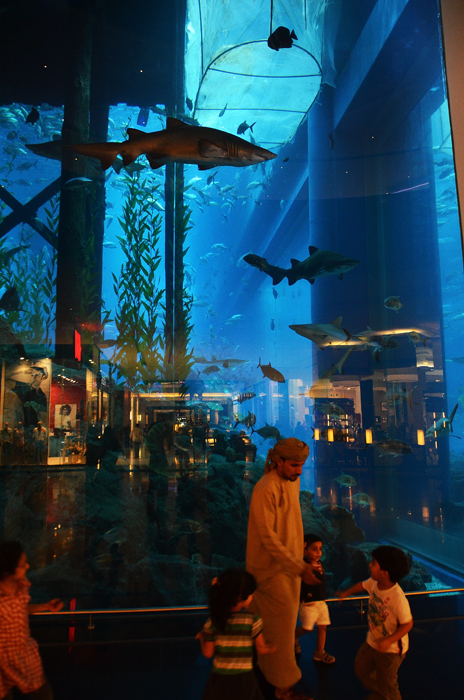 A view of the huge salt-water aquarium. I don't know what kind of sharks those are, but they look big and mean. 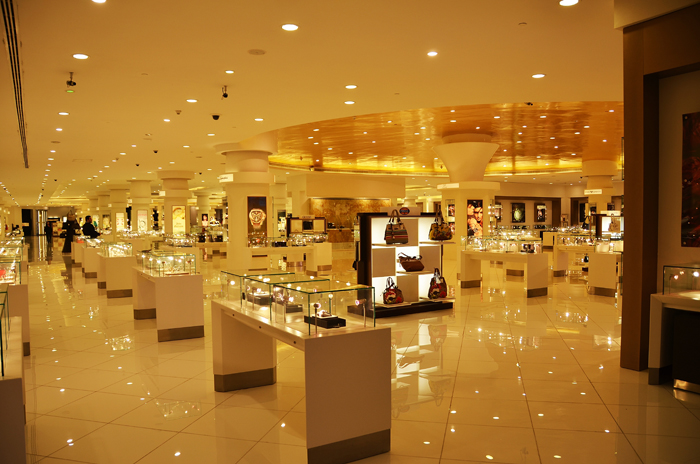 This store is dedicated to selling watches. That's it. And there are four stores just like it, side by side. How the hell do I choose a watch? 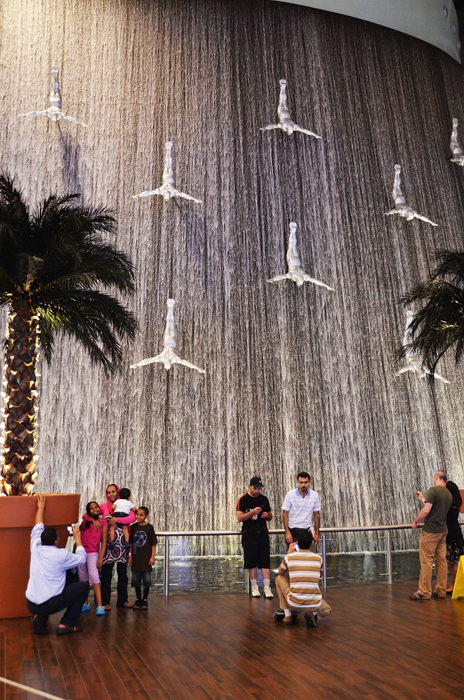 The indoor waterfall that dominates one corner of the mall. It curves off to the right and left, and there are actually two sections that pick up again after a break for some stores and entrances. 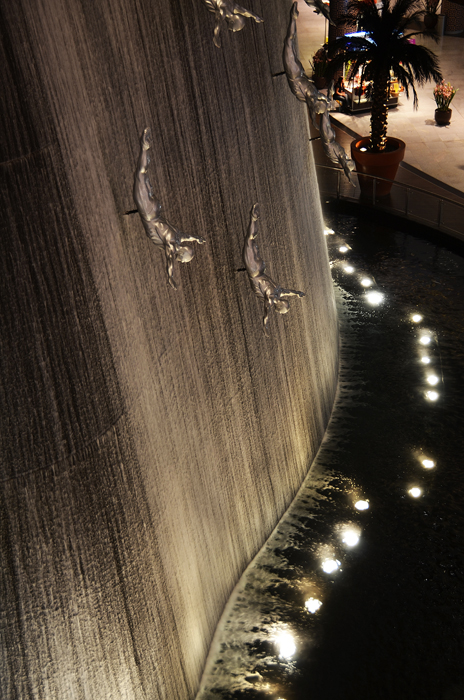 Just a little closer to the sculptures from a third floor vantage point. 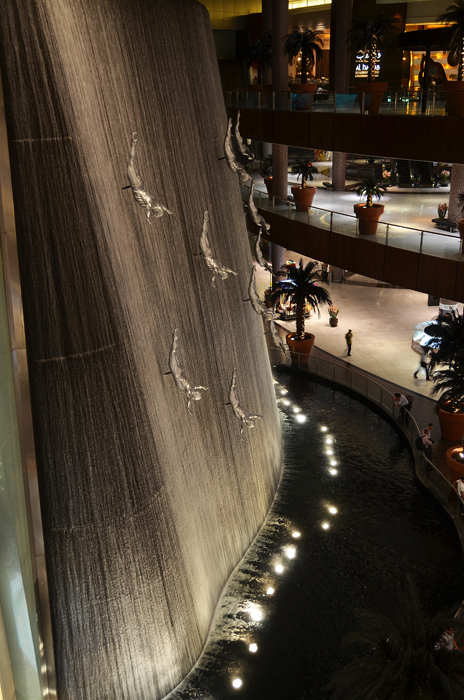 The indoor waterfall shot from the third floor. 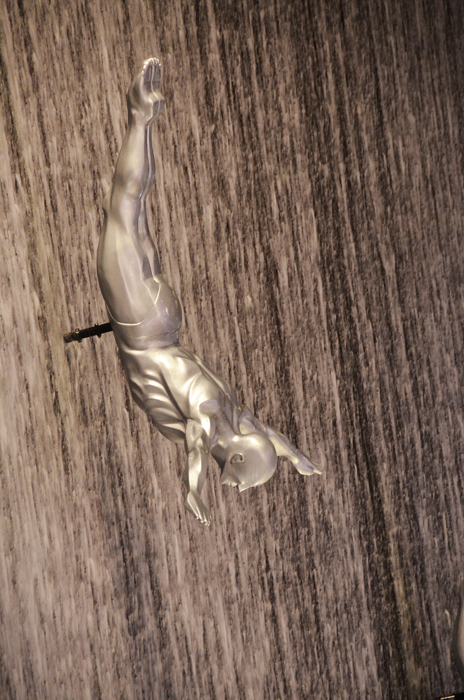 One of the diving sculptures. 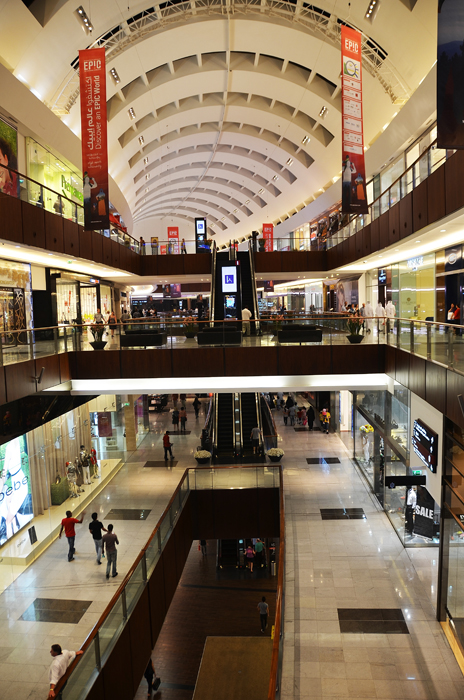 View down one of the long halls of the Dubai Mall. You can see the four floors. The map of this place doesn't show where the stores are - like atlases, it puts stores in quadrants of the map, and hopes you find them. The map is also a large touchscreen so that you can type queries of which store you are looking for.

This is the outer shell of the mall - with inside walls made to look like outside walls, this outer ring is home to a lot of sporting goods stores. But it's huge.

One Response to Dubai in Pictures (part 2)