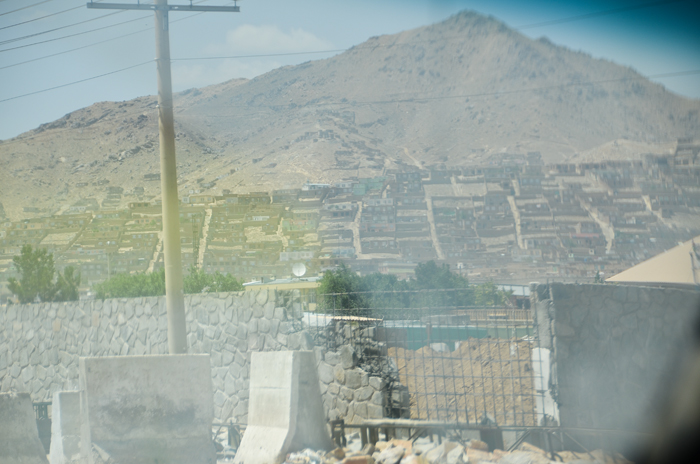 I tried to get a picture of the housing that is to the east of the camp. The way they have built up and down the hills is pretty interesting. 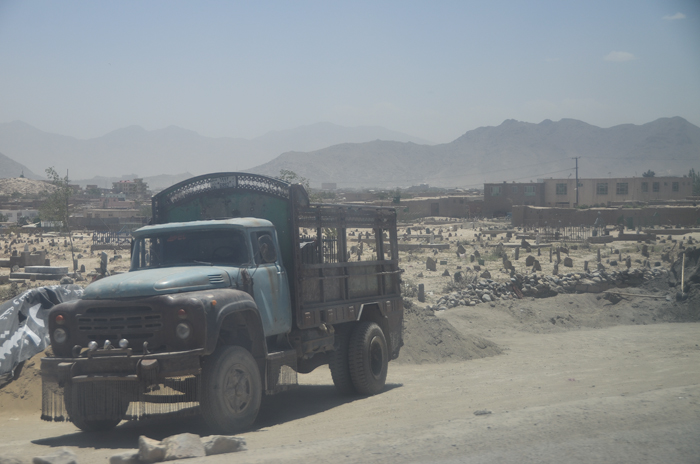 The cemetary is back behind that truck. There were several other small plots, even right downtown, but this was the largest one that we saw. 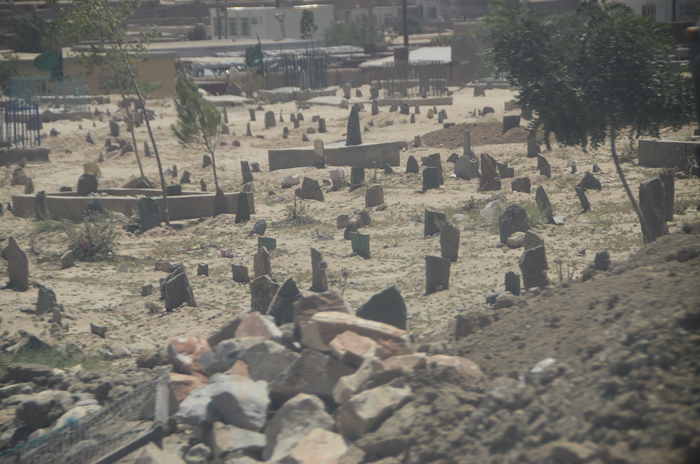 The cemetary - pretty austere - but I did notice a VFW guy trying to pick out which stones to put American flags on. Yeah, he didn't make it out. The name of this place is, and I'm serious, "Shady Acres." 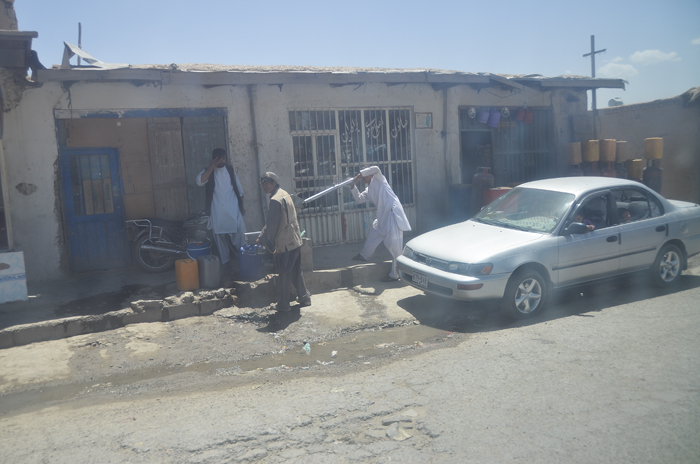 This is how you get water in Kabul - at one of the wells and you pump it yourself. I had to get used to the idea that Kabul is not a desert - there is plenty of water, and with better management, many more people could have better living conditions with running water and sewer systems. 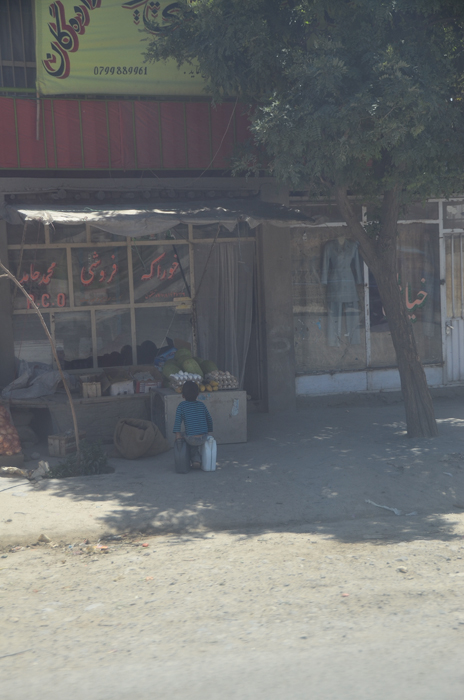 This little guy is taking a break from carrying his two 3-liter gas cans to stare into the shop window and dream about the day that he can have his own bright red AK-47. 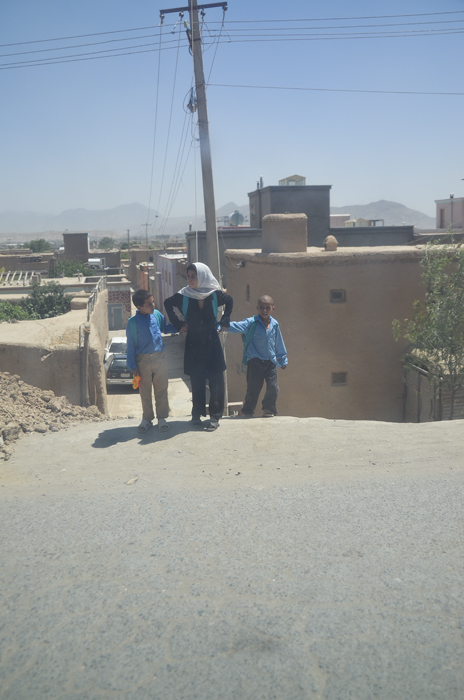 There were kids everywhere, and they all are much different from the sheltered kids in America, but the older sisters here still think they know everything. 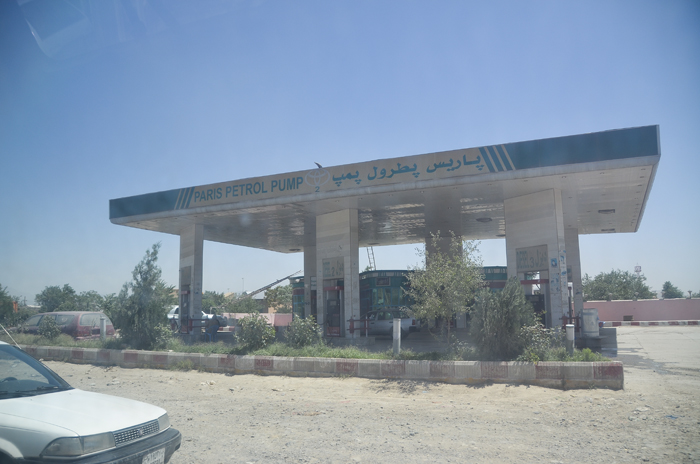 What looks like an abandoned gas station in America is a really really nice one in Kabul. We stopped in here for some gas, but I had forgotten my loyalty card . . . 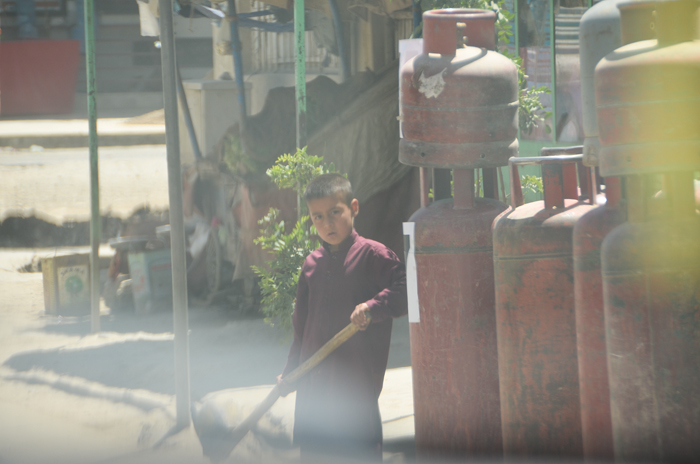 The look on this little guy's face is saying, "Get me out of here," or possibly, "I hope these propane tanks don't explode." 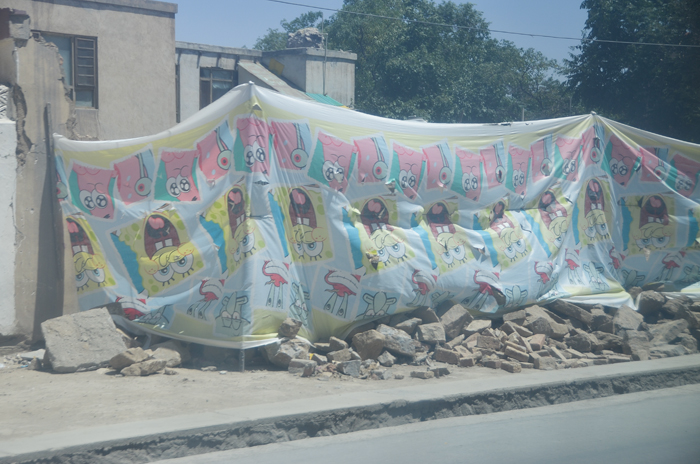 Why does the screening for construction projects have to be drab and boring? This project manager is all about putting the fun back into life. 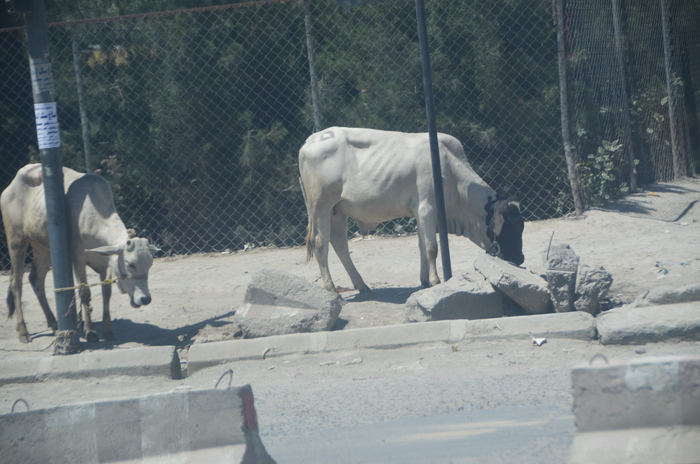 This area of the street was the designated "Cow Parking" zone. That one on the left is the 2010 BMW Bovina - pretty rare actually. 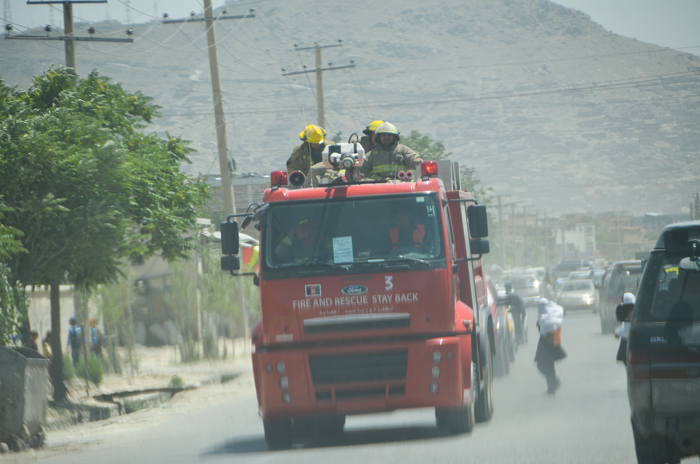 The Kabul Fire Department, on the job. Little known fact - during the winter, they are asked to START fires and ignore putting them out.

To Kill, but no license to spell.”] 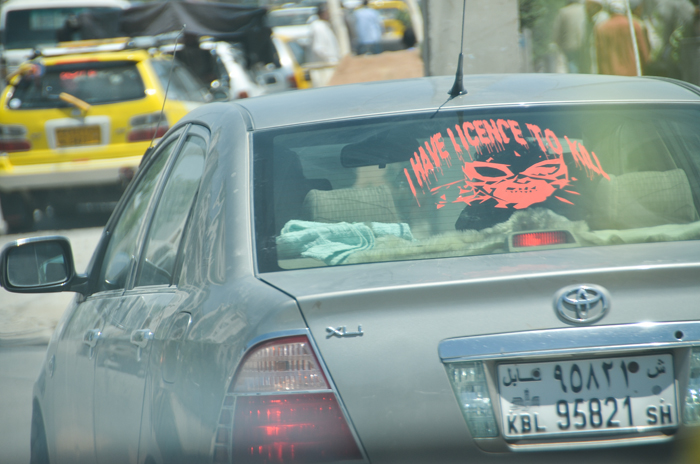 This guy had a Licence[sic 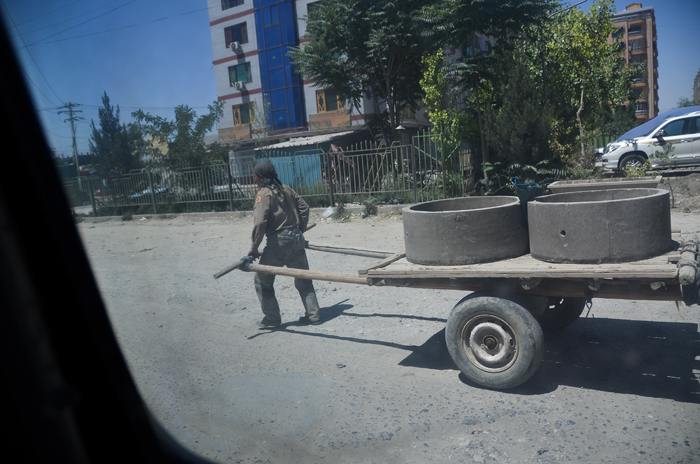 People pull stuff around using whatever they can - donkeys, motorcycles, and of course, themselves. 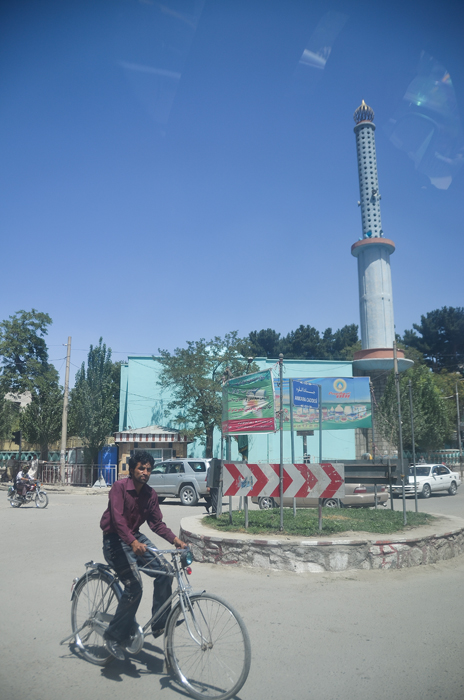 This is one of the many mosques in the city. It's also a picture of a guy on a bicycle. Both are pretty cool, but one can go wherever he wants. Can you guess which one? 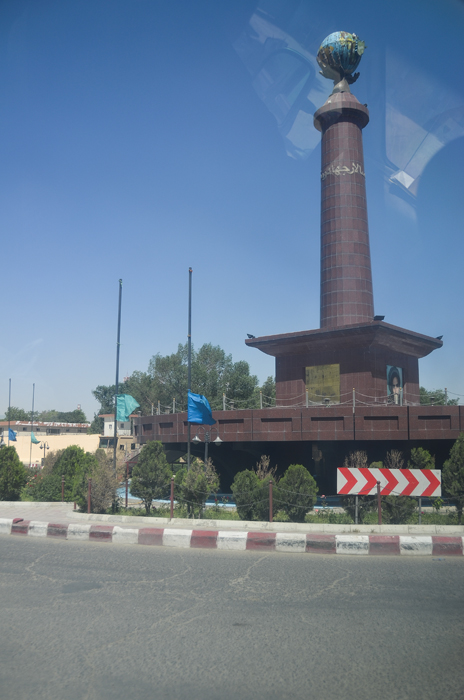 Massoud Circle - named for Ahmad Shah Massoud, one of the martyrs of the struggle against the Soviets, Taliban and al-Qaeda. There's a main entrance to Eggers off this circle. 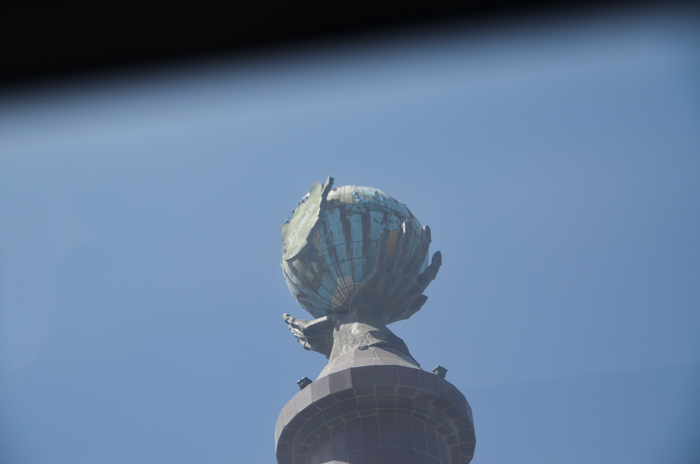 Some closeups of the top of the monument in Massoud Circle. I don't really know the significance, but I do like those two big hands cradling that huge globe. 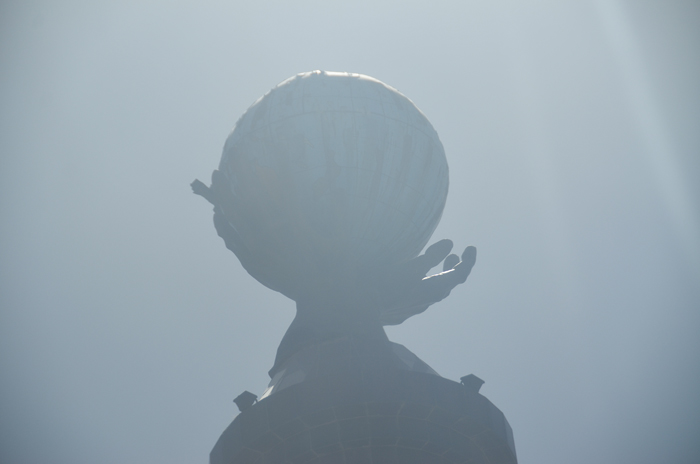 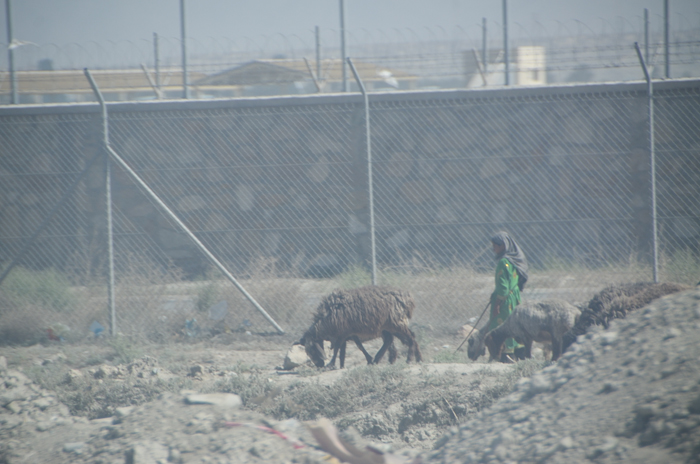 This little goatherd is on the south side of the road in a wide area where I can't imagine there is anything for goats to eat besides garbage. There is a makeshift dump here as well. Directly in the background is the wall for the ISAF base. 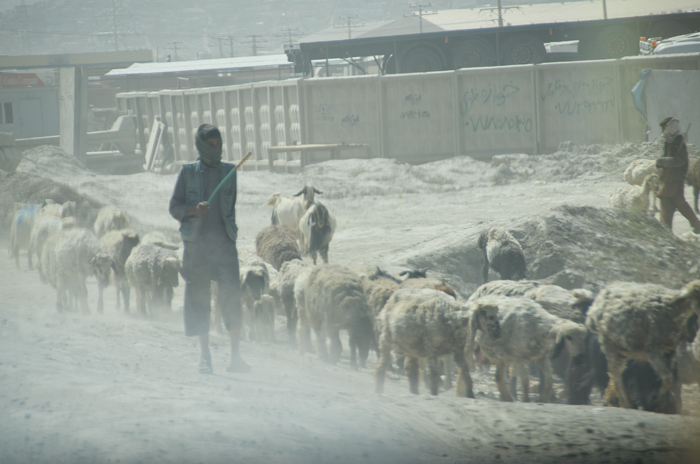 Herd of goats on the north side of the road. These goats have got to be miserable with that long hair, but maybe they look at me and think, "That human has got to be freezing without a long hairy coat." 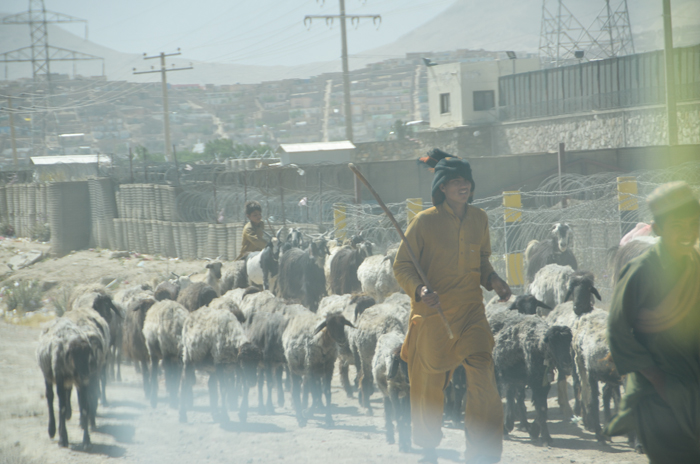 Some more caps of the goats that they herd beside the road that is directly south of the camp. I would barely get caught driving on that road much less trying to herd my goats next to it. Then again, I don't have my goats, so I can't really judge. 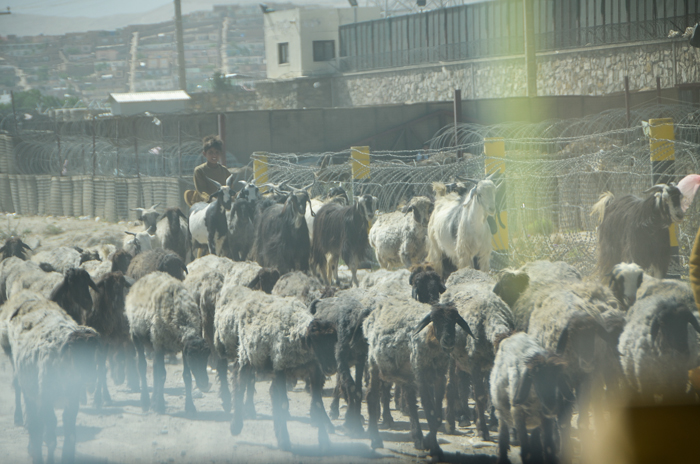 I'm not sure if that little boy is actually riding one of the goats, but if he is, I say well done little man. Ride that goat! 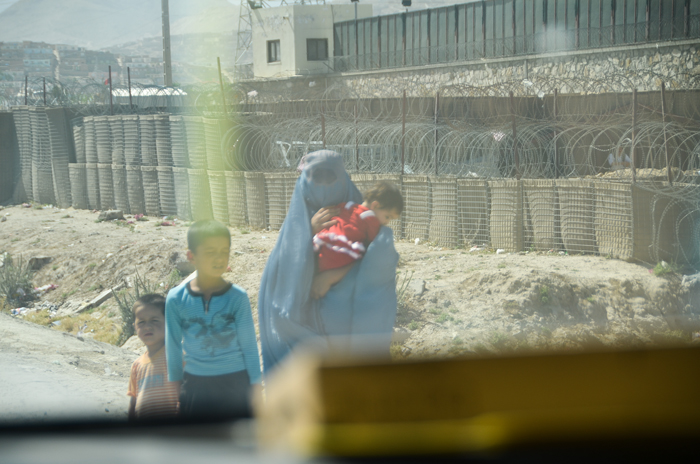 I don't have many pictures of women in the burkha - it seems a little disrespectful to take their picture without permission, but this lady with her children was spectacular.