In the afternoon, specifically during this time of year, the wind kicks up in the Kabul valley, and by the evening, there can be gusts of up to 65 kph. Some of you may be thinking, wait, 65 kph – isn’t that like 5 miles per hour? No. Those of you who were thinking that are not correct at all. 65 kph is closer to 42 miles per hour, and that’s some strong wind.

But in the morning, the winds are calm and it’s perfect weather most days. I’ve often felt bad for the helicopter pilots as they go over our camp in the afternoon. “You should have flown your helicopter in the morning!” I shout, moving my hands and arms in a huge, overstated gesture that would be seen from the sky as a sympathetic shrug.

I imagine the pilots saying through clenched teeth, “This wind really blows!” And that makes me laugh because of the hidden but funny double meaning.

This morning, about 40 helicopters flew over the camp, some flying so low that the building shook with the noise. I had turned to my coworkers and loudly asked, “What is it? Helicopter Day? Is there a national holiday in Afghanistan called Helicopter Day?”

My coworkers thought that was funny, but basically imagined that there was a large group of VIP’s visiting the local army and police camps that needed helicopter transport.

But I felt as if I correctly diagnosed the flights as helicopter flying just for the fun of it.
You could tell: the rotors were whipping around with an excited whistle and the waist mounted machine guns seemed to glisten as if filled with more than just bullets, but with a sense of overwhelming glee.

“Hey guys! We’ve got all these helicopters out there! Let’s just go and fly the crap out of
‘em!”

Then in a fit of joy, they ran out of the door of the barracks, splitting off left and right with choreographed coordination even Martha Graham would have had to applaud. Leaping to the dilapidated yet shining cockpits, throwing eachother jaunty thumbs-up gestures, the fleet slowly rose from the ground. Over the radio you could clearly hear Abdul Rahim Mashashoodi Pilot Leader say, “There is a feeling I am feeling that I have an urgent – an urgent for high speeding!”

Sadly, several of the ill-maintained vehicles crashed into the mountain almost directly after takeoff, but since the average crash rate was at least 4 or 5 times that, the rest of the pilots felt that indeed, it was a good day. June 9th would forever be known as Helicopter Day.

This was the story I told my Afghan co-workers this morning even as helicopters thudded overhead. And surprisingly, they were very entertained. I asked them what we should do to commemorate Helicopter Day and we agreed that children should be given piggyback rides where the adult spins in a helicopter-like motion until the child and adult alike are physically ill. 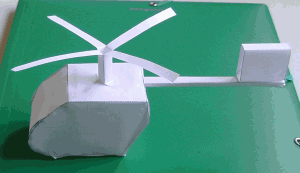 Paper helicopters like this one are acceptable on Helicopter Day but for crap's sake, that's a lot of work for something that obviously won't fly. Do yourself a favor, make a paper airplane. Don't try to impress anybody with this nonsense.

But the key part of the celebration would be to write special messages on blank sheets of paper, then fold the papers into airplanes that you would throw to the gale force winds, hoping the messages reach their intended recipients. Airplanes thrown specifically to poke someone’s eye out would be the Taliban’s special way of spreading terror on this holiday.

So happy Helicopter Day everyone. Get out there, make a paper airplane, and show someone you care -

This entry was posted in Entertaining, More or Less. Bookmark the permalink.

One Response to Helicopter Day