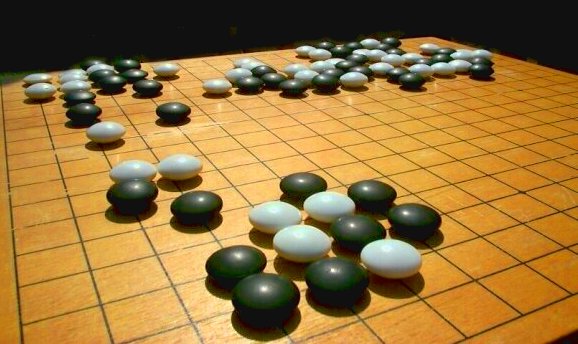 I’ve got many objectives to accomplish while I’m in Afghanistan while I have this ridiculous amount of downtime. But in some of my leisure time, I’m learning to play Go, an ancient game that originated in China. The simplicity of it – a flat board decorated only with intersecting lines and game pieces of smooth black and white – is bellied by the claim that there are more possible Go game scenarios than the count of atoms in the known universe. For you math nerds out there, the grid of the game board is 19×19, with 361 possible intersections on which to play a piece, and the game has no definite finish – ending when the players agree that the game is over for both of them.

All of that complexity leads to a game that humans truly dominate and that the most advanced supercomputer cannot predict. It is said that even mid-level masters of the game train to see up to 40 moves in advance. While that master may not be able to see every single possibility for each of those 40 moves, the trick of teaching a computer to play a game perfectly is that the computer MUST be able to see every possibility. So with the stats listed above, desktop computers are able to see a couple of moves in advance, but even trying to see three or four moves in the future within a few minutes, requires a supercomputer. And to see eight moves in advance, the greatest supercomputer/networked supercomputer group, would take over 100 hours to compute all the possible outcomes.

Much like golf, players are handicapped in Go, and the greatest handicap allowed is 8 points. It was only in the last few years that a computer, handicapped at that maximum number of points, was able to consistently defeat players on a 9×9 teaching board. On the full 19×19 board, the computer flounders and it is only the human mind that can determine how to defeat another human player.

The training methods used in some Asian countries to teach people to play this game are truly astounding. Chess is a brilliant game, and the culture of chess mastery is also fascinating, but I’ve been intrigued by the fact that in chess, at any one time there are normally 20-30 possible moves. In Go, there are upwards of 100-200 possible moves at any one time.

So the first lesson that I have taken from learning this game, is that I’m an idiot. There are 10 year old Korean children with 100 times more aptitude than I have with this game. But more than that, it is reinforcing a sort of romantic view of gifted humans. We all know those people that seem to be able to comprehend and perceive things in much different ways or much quicker than anyone else. I’ve read and reread the biographies of John Adams, Einstein, Marie Curie and others, and these people thought on such a different level that it must have seemed like magic. When I was in an economics class and we were studying game theory, there was a point where my brain declared that it was no longer going to support my inquiries into the matter. But at that point, the brain of someone like John Nash shifted into a much higher gear and developed systems of thought that have guided economists for years.

I’m in awe of this and I celebrate it. And before you ask if I’m trying to set myself up as a ravening humanistic demagogue, I’ll tell you that I’m not, though I’m impressed with your use of the word “demagogue.” I believe that I rejoice in the complexity and capacity of humans in the same way that our creator does. We don’t have to pretend we’re stupid and incapable or downplay ourselves to make God seem great.