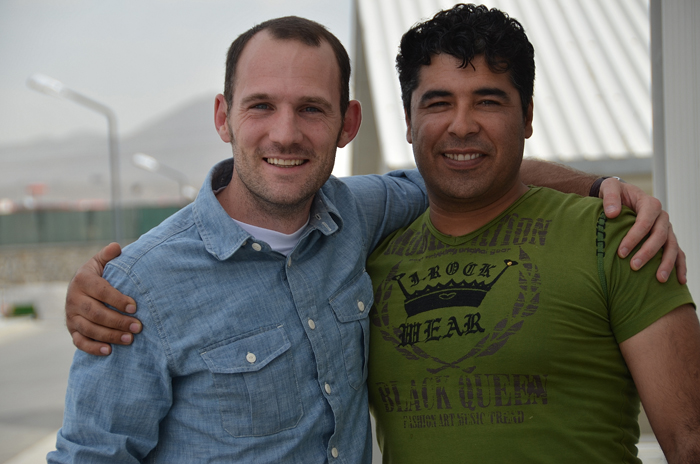 Me with Sayed Ghafoor on his last day at Camp Gibson. And yes, in person he also resembles a large, dark-skinned teddy bear.

Yesterday was a sad day in camp because one of the local nationals that had been working here for over four years, worked his last day and then resigned. His name is Sayed, but most know him by his surname Ghafoor.
I’ll never forget the first pictures that I received when I was hired for this job, months before I would even get to leave the US and travel to Afghanistan. There were many people in the pictures that I now know personally, and there were many that were gone by the time I was finally in-country. But one face caught my attention, and it was Ghafoor. In all the pictures, he was smiling and laughing, and his broad, open face was one that you don’t easily forget.
I was glad, when I arrived to get to meet Ghafoor, and I was immediately impressed with his professionalism and leadership in the office. He knew his way around a computer, and his knowledge of the detail work required to complete the finance mission was impressive. And through all the work and all the details, he would have that same broad smile on his face.
He helped me to learn a lot about Afghan culture and history, not to mention helping me to translate “We represent the Lollipop Guide” into phonetic Dari for one of the crazy blog posts I was writing. To get to work each day, Ghafoor drove his car an hour in conditions, that you can see from pictures posted earlier, were not the best for a 4×4, not to mention a normal car.
Each day, he would leave at about 4 p.m. – an arrangement he had made with management, so that he could get a head start on traffic on his way to school. He is studying to complete a bachelor’s degree here in Kabul.
But in the last few days before he left, I learned more about him and about the kind of person he really is. He has a wife and two children. He has applied for a visa to the United States, to move there and try to give his family a better life. I told him I thought it was sad that he had to move away from his own country to find a better life, but he told all of us that he just doesn’t care about himself or where he needs to live – he wants his children to have a better future.
I asked him if his kids spoke english, and he said that they did, that he had been sending them to a private school in Kabul. The government funded schools do not teach english, he told me. He then told me that it costs over $100 a month to pay for his child’s school. To put this into perspective, the average working person in Afghanistan, can earn between $120-$180 each month. A national police officer or national army officer can make a little bit more, but those salaries range from $150-$200 a month. The controversy in the country is that the well-funded Taliban will pay people $300 a month to plant roadside bombs. Whatever and whoever is paying the Afghans, $120 – $300 a month is peanuts. This is what these people live on, and I know what Ghafoor made while working here at DynCorp, and the cost of putting his kids through school was easily 25% of his income each month.
I’m no Sally Struthers or bearded guy that makes you feel guilty on the TV, but when I think about the fact that I would spend $100 on dinner and a movie in one evening while in the states, and that same $100 could drastically change a person’s life here in Kabul, the realization is sobering.
Ghafoor has moved on to another job with another international organization, and I wish him the best of all things. In the short time I knew him, I believe we became friends, and I hope he is able to someday come to the US so that you all can meet a very extraordinary person who has carved a life out of some of the most difficult circumstances on the planet.

This entry was posted in Super Serious. Bookmark the permalink.

One Response to Ghafoor is gone