Our trip to the bank was fraught with danger and intrigue, and these are the pictures to prove it. Okay, so very little intrigue and not a whole lot of danger. 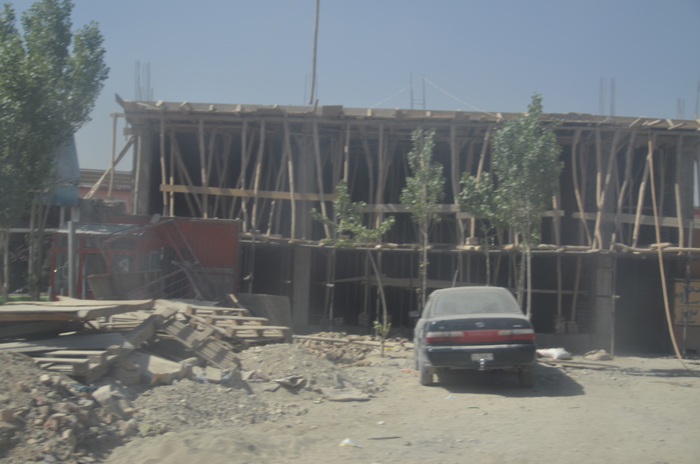 This is how buildings are built over here - I've seen it in many different places - using what amounts to big sticks to hold up the roof of a building while the concrete cures. Awesome. 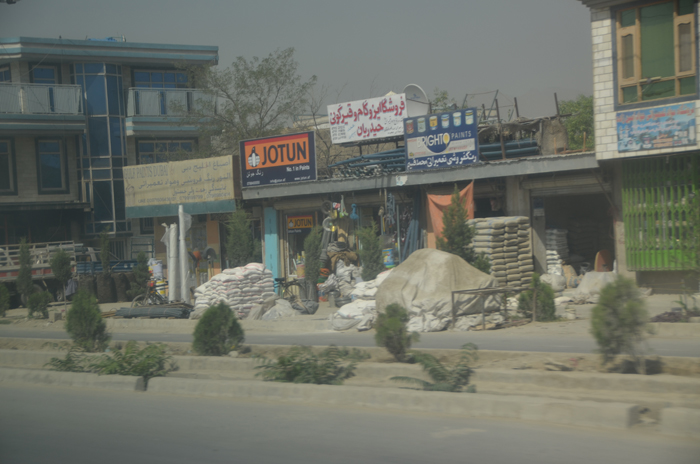 Just some of the small local shops. 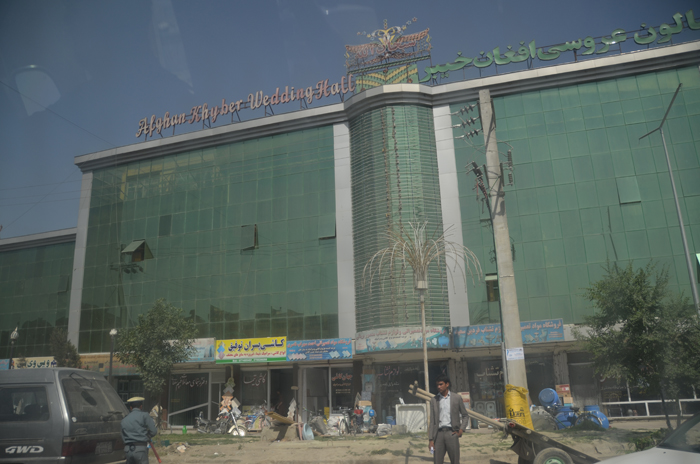 One of the many hotel and wedding hall combinations we saw on our way. If you are lucky, you can walk outside for a few choice pictures of the wedding party near ... a pile of rubble. 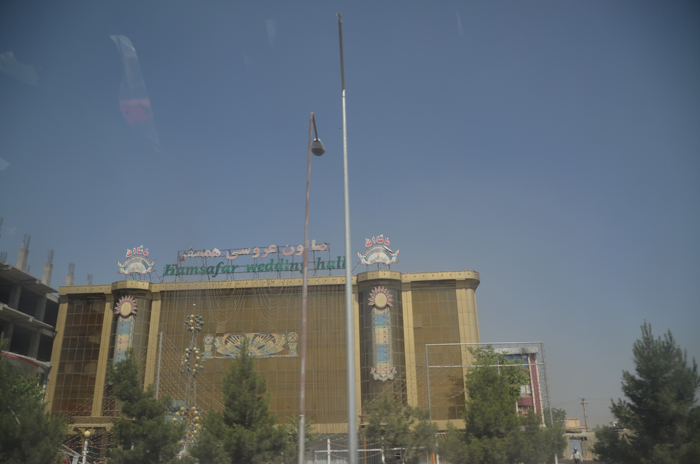 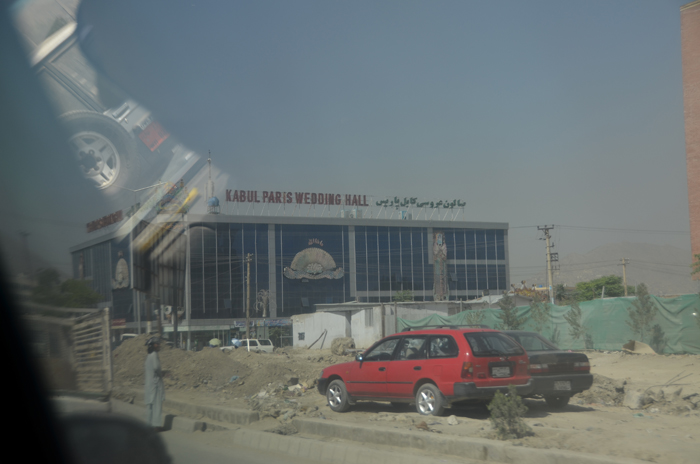 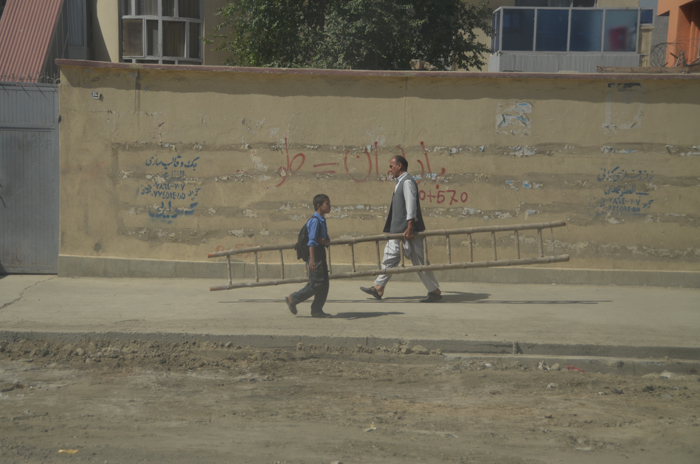 I wish there were something really interesting about this guy with a ladder, but there isn't. It's a guy. With a ladder. 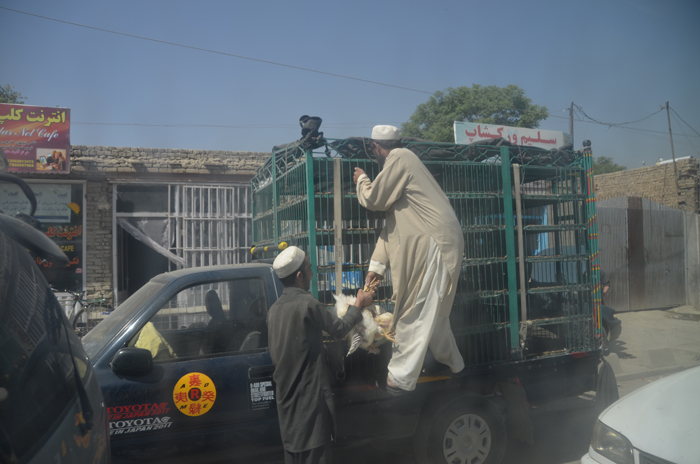 Much like a pizza delivery guy, this is the chicken delivery guy. Call him at 1-800-CHI-CKEN and he'll delver live birds to your door in under 30 minutes or your next chicken is free! 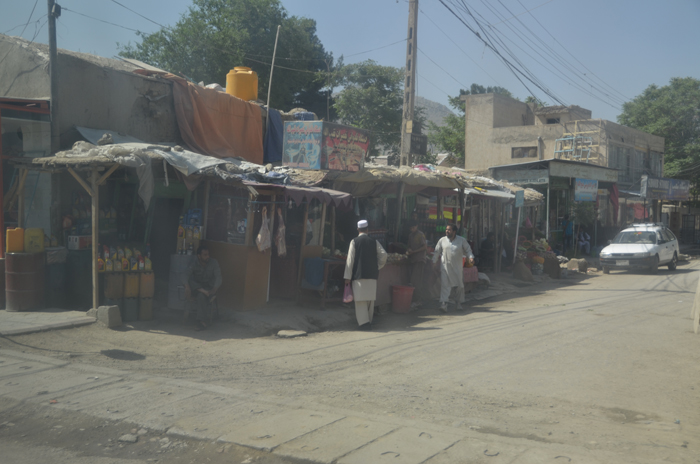 Two things in this photo - first the meat. See it hanging out in the open air? This is tame compared to some of the rows we passed where there were haunches hanging all along the storefronts. The other thing in this picture is the gas station. Do you see it? It's that guy on the far left, sitting next to the fuel cannisters and the oil (which is right next to the hanging meat....) Next time you feel like complaining about gas prices, think about what he's charging. 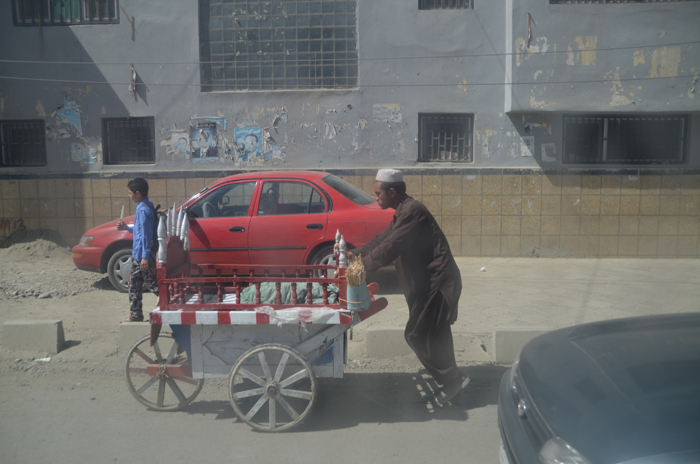 This guy is ... wait for it ... the ice cream man! No wimpy little van with tinkling music for this guy! He's hard core. Those sticks on his left are what he uses to make a sort of ice cream pop. You can see the kid in the top left eating one of them. 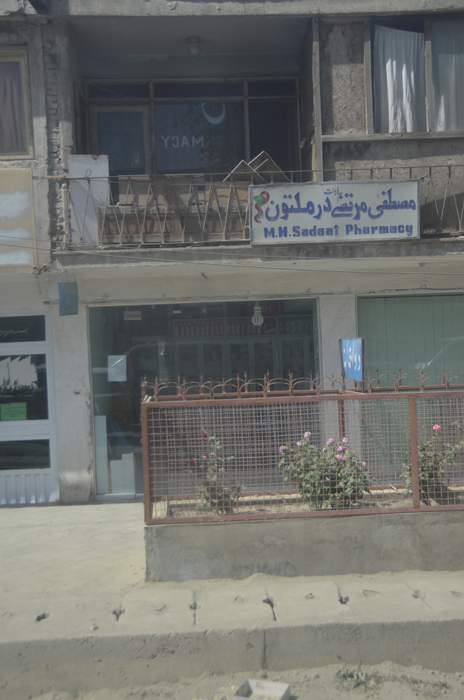 This is a pharmacy. I asked our security detail if I could stop and pick up some cocaine and amphetamines, but turns out, they already had some in the armored vehicle! I joke. I didn't ask to stop. 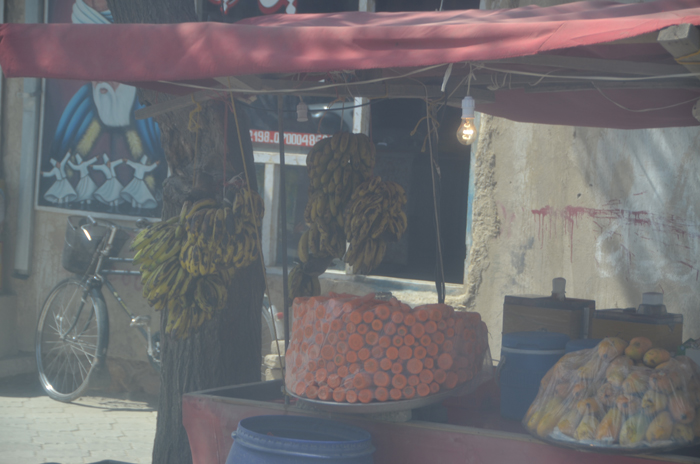 This is a stand where a guy was making and selling juice. Ian's comment was the best, "I think I saw that guy at Sam's Club!" 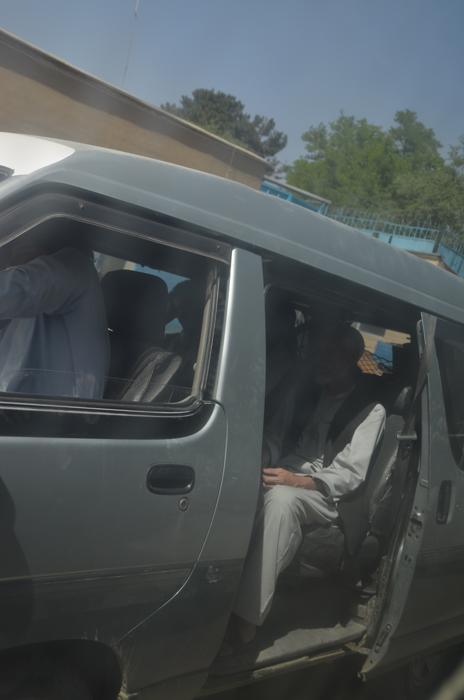 A guy riding in one of hundreds of little vans used as taxis. People share them, and it wasn't uncommon to see 9-10 guys packed into one van. 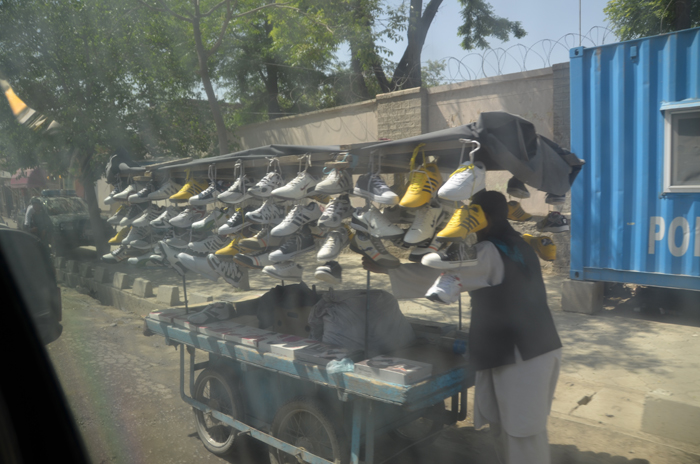 This is the Nike outlet store in Kabul. 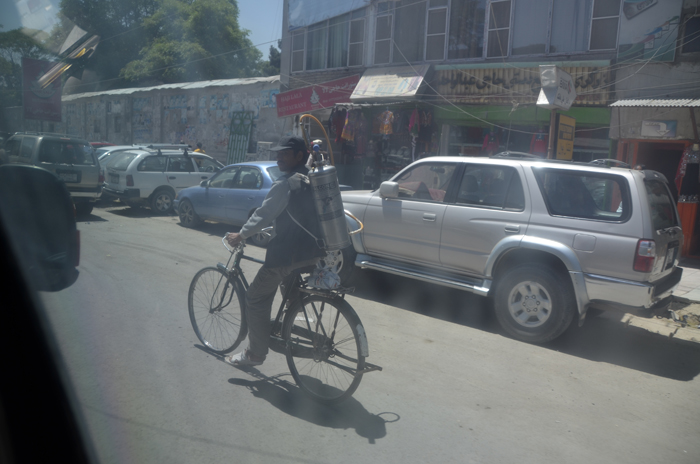 This is the Afghani version of a camelback. Not quite as easy to carry, but it does the job. 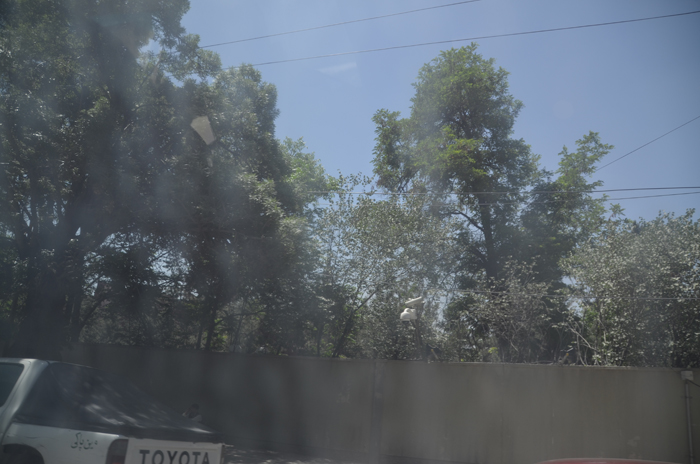 Just a shot to show that there are trees here. Near downtown, there are more and more trees. Even though they are dusty, it does help to make the place look a little friendlier. 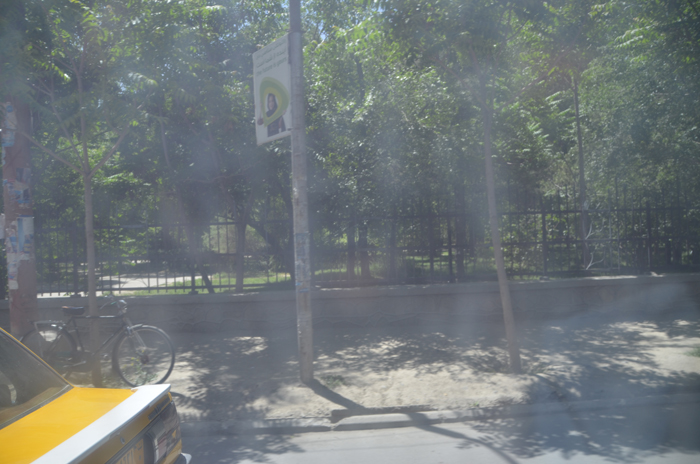 One of the parks, next to one of the mosques we passed. I was glad to see some areas of the city that were a little more green. 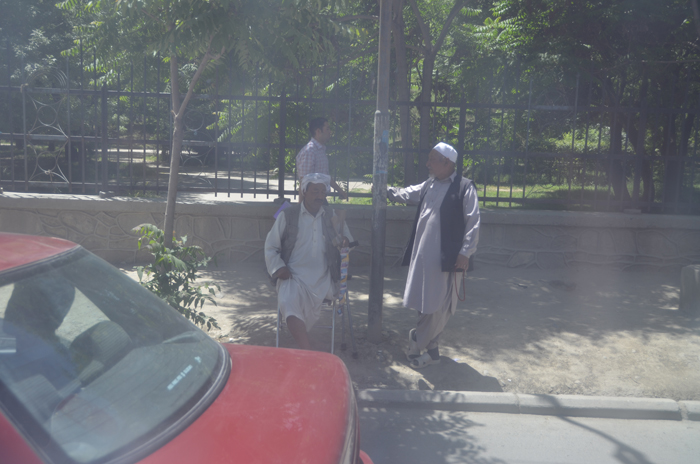 The local bank. This is one of many people in the country that will exchange money and sell you phone cards. Locals refer to these guys as "the bank" which is a pretty cool nickname. 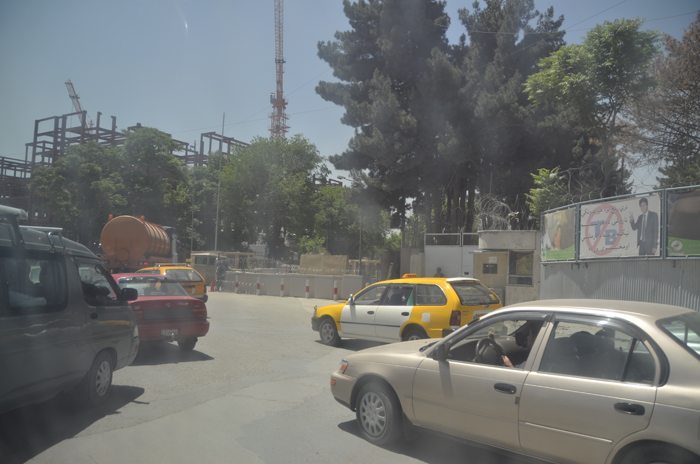 The entrance to Camp Eggers and the US Embassy. 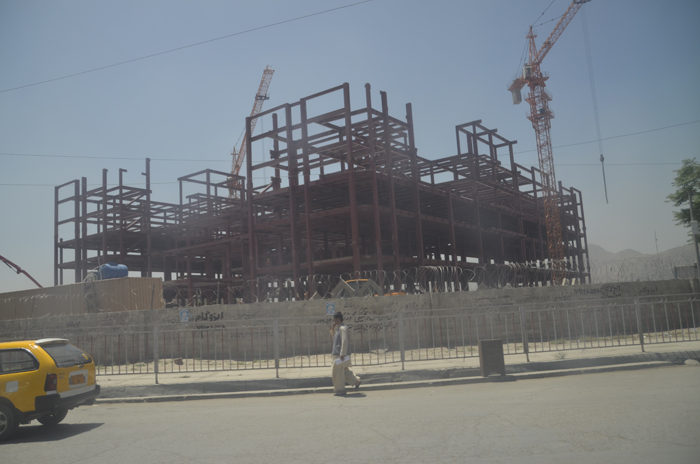 Ghafoor made me take this picture. It's a building site. Near the US Embassy. I find it boring, but he was excited. This will be a hotel where internationals can stay in relative safety.